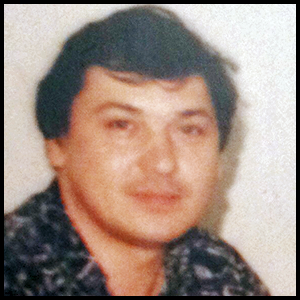 Position when arrested: He was released from duty prior to his arrest.

Date of arrest:  According to Memorial, he was arrested December 7, 2002. The video of his ‘confession’ was shown on television in Turkmenistan on December 18, 2002.[1]

Sentence: His trial, along with that of others was held on January 20-21, 2003,[3] and he was sentenced to 25 years imprisonment on January 21 by the Ashgabat city court. The first 5 years were to be served in a prison in the town of Turkmenbashi, and 20 years in a penal colony. Further, he was prohibited from holding substantive and responsible management positions for three years after release, and was to reside in a prescribed location for 5 years after release.[4]

Biography: He graduated from the Turkmen State University with a major in Philology.

Batyr Berdyev was nominated for, but did not win, the European Parliament’s Sakharov prize in 2003 following his imprisonment.[5]

Information on arrest/treatment during imprisonment: According to the description of another prisoner, Berdyev was severely beaten and tortured during the arrest at his residence.[6] According to the opposition website “Dogra El” he was demonstratively and brutally beaten during his arrest by three KNB officials, while handcuffed to a door.[7] In a publication by the Open Society Institute, Mr. Berdyev is listed as a victim of human rights violations in Turkmenistan as he was tortured while in custody.

At the trial, Berdyev and other defendants described being subjected to torture during the investigation, and asked the lawyers not to tell their relatives, in order not to cause them more suffering. They also talked about the fact that in days leading up to the trial, they did not receive any food. But Batyr Berdyev said that “hunger was nothing compared to the torture to which they were subjected.”[8]

Leonid Komarovsky, who was imprisoned along with Berdyev, saw Berdyev after six weeks of intensive interrogation, and described his appearance as ‘absolutely disfigured.’ His, and others’, kidneys and other internal organs were completely destroyed.[9] Komarovsky described being injected with psychotropic drugs at least three times, and it can be safely assumed that others, including Berdyev, were subjected to this torture as well.

Last seen/heard about: According to a source, his voice was last heard by a fellow inmate in May or June 2005. Families and independent organizations, including the International Committee of the Red Cross and Crescent have not been allowed access and do not know whether Batyr and others are dead or alive. The government refuses to respond to allegations that at least eight, including Batyr Berdyev, died while in custody.[10] President Gurbanguly Berdymukhamedov, during a visit to Columbia University on September 24, 2007, was asked whether Boris Shikhmuradov and Batyr Berdyev were still alive. The President expressed confidence that the former Foreign Ministers were still alive.[11] This is the only statement on the subject by the Turkmen authorities.

Relatives arrested/harassed/detained: Batyr Berdyev’s younger sister, Dzhenet Berdyeva, married to Esenaman Yklymov, was arrested for involvement in the alleged assassination attempt on President Niyazov in November 2002. Dzhenet Berdyeva was born in 1967. She was detained by the police in Ashgabat on December 8, 2002, with her two minor children between 8:30 pm on November 25 and 2 pm on November 26, 2002.

Mrs. Berdyeva was released on December 10, 2002. She states that she was tortured, and her property, including her apartment and store, was confiscated.[12]