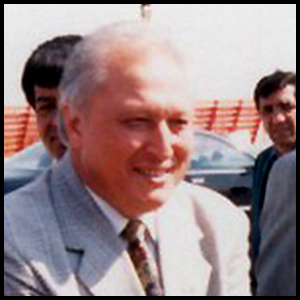 Date of arrest: November 25, 2002, 6 pm. He was summoned to the Ministry of National Security by Iskander Kurbanov, and at 9 PM he called his wife Alla saying he would not be returning for a while. He never returned.[3] The video of Guvanch’s “confession”was shown on TV on December 29, 2002.[4]

Sentence: He was sentenced to life imprisonment with confiscation of property.[6]

Biography: Djumaev was born in Beshir village of Hodjambaz district in Lebap Province. Guvanch Djumaev holds two degrees in agriculture and economics. In 1988, he led the horse run from Ashgabat to Moscow. In the last years of the Soviet Union, he engaged in business, and in the 1990s founded the corporation Gayrat, which employed over 1000 people and specialized in food production, the sales of pharmaceuticals, small trade, and the restaurant business. At one point, he was fined more than 500 million manat ($17.5 million) for the illegal production of pharmaceuticals. According to Komarovsky, in 1999 he was sentenced to two years’ imprisonment on charges of tax evasion, but was pardoned by a Presidential decree in the courtroom. From the end of 1999 or beginning of 2000, he lived in Moscow until In June 2, 2001, when he was arrested in Moscow at the request of the Turkmen authorities as a defendant in a case of economic crimes, having allegedly stolen $1.3 million in public funds.[7] In June 2001, he was extradited to Turkmenistan, but was almost immediately released at the request of the Ministry of National Security to transfer a part of his business. There was an international campaign requesting his release, including appeals by Ludmilla Alexeeva of the Moscow Helsinki Group and Valentin Gefter of the Institute of Human Rights.[8],[9]

Guvanch Djumaev was an active supporter of democratic reforms in Turkmenistan. In the early 1990s he published the independent newspaper Contact, which at the end of 1993, the authorities closed due to “excessive” freethinking. In 1994 Djumaev gave an interview to a correspondent of the paper Izvestia, Vladimir Kuleshov, in which he spoke frankly about the causes of the deterioration of living conditions in the country, and accused the government of carrying out the wrong socio-economic policies. Over the years, he was said to be in communication with the opposition living abroad.

Information on treatment during imprisonment: Djumaev was reportedly tortured, with significant damage to his kidneys. He suffered internal bleeding. The authorities wanted to throw him from the third floor window.

Relatives arrested/harassed/detained: Several of Djumaev’s relatives were harassed, arrested, detained, have undergone ill treatment and were possibly tortured.[10] His son Timur, and his 70 year old father were arrested on the same day, and his wife and daughter were later questioned about the events on the evening of November 24th. The authorities wanted to take away his mother, but they could not because she had trouble walking. Djumaev family members were not allowed to visit any of the prisoners, their property was confiscated and they lost their jobs. They are also under surveillance 24 hours a day.[11]

From the house at Chogalny, all of the visitors were automatically taken away by the watchmen. In December 2002, Djumaev’s daughter (8th grade at the time) and nephew, in schools No.7 and No.15, were put before the class and declared “enemies of the people.” Later that month, a boy struck one of them, but the teachers did not help. His wife’s café business was taken away and sold to another family, with the money staying with the officials. Aia Djumaeva’s apartment was also taken away.

[7] Guvanch, through his firm Gairat and with the unofficial support of the Turkmen government, brokered and organized the transfer of petroleum products from Afghanistan to Pakistan. The contract was between Gairat and a Pakistani firm, and payments were made partly in cash. This continued from 1997 until after the start of the US operations in Afghanistan. On June 2, 2001, Guvanch was arrested in a café in Moscow, after information was obtained through his tapped cell phone. He was detained for a few days in solitary confinement in the facility at Petrovka, and then extradited to Turkmenistan. Before the extradition, the Moscow police took about $1-1.5 thousand in bribes. Before this incident Djumaev wanted to permanently settle in Moscow with his family. He was released in Ashgabat after handing his office to the government.