Turkmenistan’s first president, Saparmurat Niyazov, completely suppressed dissent and eliminated any political competition, using legal and extralegal forms of harassment. The opposition, the dissident movement, independent journalism and civil society were completely destroyed. The peak of this policy was the mass repression that took place in the first half of the 2000s, when there was widespread use of fabricated criminal cases, confessions obtained through torture, closed court hearings, illegal sentences and long term imprisonment in secret prisons.

(for the Russian version of the video, click here)

In most cases, no information about those people who have been imprisoned for long sentences has been available to their relatives or to society. For over ten years the authorities have not allowed relatives to meet with the imprisoned. Correspondence is forbidden. The International Red Cross and other international organizations have been denied access to prisons. Those who are imprisoned have been totally isolated from the outside world.

The complete absence of information about the fate of their loved ones for over ten years amounts to the torture of their relatives. Their loved ones were convicted to a prison sentence, but not to death or oblivion. We believe it is very important to bring to light the personal histories of these people and demonstrate that they are not forgotten. Their families have borne this burden for an entire decade. It is time to end their suffering.

A tragic example of those who have disappeared in Turkmen prisons is the fate of dozens of people who were convicted in the criminal cases of alleged involvement in the assassination attempt on President Niyazov in 2002 and the related criminal cases against their relatives and friends. The fate of those convicted in a number of other “high-profile” cases in a series of mass repressions in the 2000s is similar. 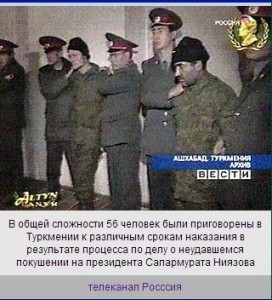 ew York, made the only official mention of the fate of two of these people—out of the enormous number of illegally convicted and disappeared people. Answering a question about the fate of Boris Shikhmuradov and Batyr Berdiev, Berdymukhamedov stated, “…I am sure that these people are alive.”1

Furthermore, recently, disturbing information has come from Turkmenistan. Families of relatives who have been imprisoned for more than ten years and whose terms have either expired or are coming to an end have begun to share information that their relatives were re-sentenced to additional terms. In many cases, this is the first information that the family has received about their loved one since the moment of their arrest and conviction. We have reason to believe that the Turkmenistan authorities want to prevent the emergence of such persons to freedom in order to conceal information about the detention conditions in prisons or falsification of the facts of criminal cases against them.

As difficult as it is to admit, it is possible that many of these people may have died in custody, and the authorities do not wish to disclose this information. By doing so, the current Turkmen authorities would accept responsibility for the repression committed by the previous regime. As a result of injustice, tyranny and lawlessness continue to this day.

The continued blatant disregard by the Turkmen government for its international obligations in the field of human rights, and even its own national legislation in respect of the above cases,2 suggests a critical need to renew pressure on the government of Turkmenistan to ensure that the situation has changed.