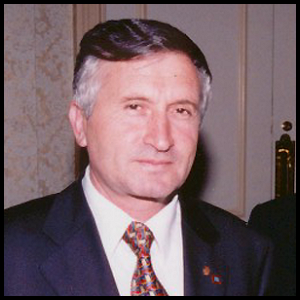 Position when arrested: Days before the arrest, Sardzhaev was dismissed from his position as Head of the Turkmen Railways, “Turkmendemiryollary.”[1]

Date of Arrest: He was arrested on August 5, before the start of the Halk Maslahat  (People’s Council) of Turkmenistan.[2]

Charges: He was charged with “unclean affairs in the railway industry,” including embezzlement.[3],[4]

Sentence: In 2002, he was sentenced to 12 years in prison and disappeared without any information.

Biography: Sardzhaev was born in Dashoguz; his family moved there from Kizil-Arvat in the 1920-1930s. He graduated from high school in 1963, and studied at the Turkmen Agricultural Institute from 1968-1973. From 1963 he worked as a locksmith miller at the Dashoguz auto-repair factory named after the “40th anniversary of the Turkmen SSR.”

From 1964-1967 he served in the Soviet Army. From 1973-1979 he worked as a miller in the railroad service. He was a depot master of the Ashgabat Vocational Industrial Institute Number 6. He was also the head of the technical control department, and chief engineer of the Ashgabat repair plant Number 1. From 1979-1980, he was the Deputy Chief of Operations, and Chief Engineer of the Ashgabat Industrial Motor Association Minavtotrans TSSR. In 1980-1986, he served as the Deputy Head of the Department of Transport and Communications of the Office of the Council of Ministers of TSSR. From March 1986, he worked as Deputy Chairman of the Executive Committee of Ashgabat. In November 1986, he was appointed the 1st Secretary of the Leninsk Regional Committee of the Communist Party of Turkmenistan (CPT) of Ashgabat. In 1988-1990, he served as the Head of the Socio-economic Department of the Central Committee of CPT. Beginning in 1998 he also oversaw the oil and gas sector. From April 1990 he was the 1st Secretary of the Ashgabat City Committee of CPT. From January 1991 until May 18, 1992 he was the Chairman of the Ashgabat City Council. On May 19, 1992, he was appointed Mayor of the city of Ashgabat. In June 1993 he was appointed Deputy Chairman of the Cabinet of Ministers of Turkmenistan (Deputy Prime Minister). From April 1997 to May 1998 he was also the Minister of Petroleum and Mineral Resources. From May 24, 1999 till June 2001 he served as the Deputy Chairman of the Cabinet of Ministers, Defense Minister, and Rector of the Military Institute of Defense (assigned to coordinate all Security Departments).[5] This assignment was Niyazov’s attempt to rebuild the Turkmen army after its collapse. In this capacity he became the first civilian to be Defense Minister in the CIS.[6] He was also the Deputy of the 12th meeting of Turkmenistan’s Supreme Council. Sardzhaev was considered by some a protégé of Niyazov and very close to the President. He was regarded very well by Niyazov himself.[7]

He was awarded the medals “Galkinish,” “Bitaraplyk,” “Ghairat,” and “For the Love of the Fatherland.”

From June 2001 until July 29, 2002, he was the Head of the Turkmen Railways “Turkmendemiryollary.” Other sources say he was appointed to this post in October 2001. On July 29, 2002, Sardzhaev was dismissed from the post without a right to take up further leadership positions.[8],[9]

His removal from office became a grand spectacle, with the three national television channels spending a week strongly denouncing Sardzhaev and accusing him of embezzlement. People who knew him have written online that he was educated, loyal, honest and hardworking. Sardzhaev was noted for his integrity and efficiency at work.

Information on treatment during imprisonment: According to a source, Sardzhaev was transferred from a prison in Turkmenbashi to Ovadan Depe in June 2004. He was previously reported to be suffering from poor health.[10] The horrors that Batyr Sardzhaev, one of the most respected people in the country, endured within the walls of the building of the Prosecutor General led an employee of the Prosecutor General to take an unusual step and appeal to the international public in August 2002: “Help us, please let everyone know that we have a terrible mess going on in Turkmenistan, it’s worse than in 1937. I want everyone to know,” he said, “that except for the high officials, no one in my department is able to endure the terror unleashed by Niyazov any longer.”[11]

Last seen/heard about: On August 23, a routine interrogation ended for Batyr Sardzhaev with a stroke, which paralyzed the right side of his face. According to an insider source, the Attorney General of Turkmenistan, Kurbanbibi Atajanova, fearing the incident, forbade any of her subordinates to report on Sardzhaev’s state, and on the transportation route for his interrogations between the Attorney General’s office and the detention center (SIZO) of the National Security Committee (KNB).[12]

Current situation: Unknown. His relatives, friends and the public have no knowledge about his fate.